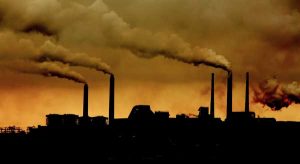 It is well understood that exposure to industrial pollutants can lead to a number of negative health effects, which can range from mild irritation to asthma and other more severe respiratory and cardiovascular issues.

Now new research from the United Kingdom and Mexico has uncovered a possible link between neurodegenerative diseases such as Alzheimer’s disease and the presence in the brain of a magnetic iron oxide compound called magnetite. Magnetite, a common industrial air pollutant released as a component of power plant emissions, is abundantly found in urban areas, particularly along roadsides.

A type of magnetite does naturally form in the brain, but the researchers discovered that magnetite originating from industrial processes forms in a shape that is distinctly different from biologically formed magnetite.

Biologically formed magnetite in the brain is believed to be naturally derived from iron the body. But magnetite is toxic and earlier studies have shown that elevated levels of brain magnetite increases the toxicity of the amyloid plaques that are the hallmark of Alzheimer’s disease. This is strongly suggestive of a link between magnetite and Alzheimer’s.

The brain samples examined for this study came from individuals who lived in Mexico City or Manchester, U.K. The presence of other metals not usually found in the brain were detected in the samples – including platinum, nickel and cobalt – which suggests a high level of exposure to environmental pollutants. But when it came to magnetite, the researchers found that for every naturally formed magnetite particle in the brain, there were at least 100 magnetite particles formed by pollution, an alarmingly high amount.

Experts caution that further study is required in order to fully understand the influence magnetite and other industrial air pollutants may have on brain functioning, while also continuing to study the impacts of other factors such as age, genetic risk and lifestyle choices on brain health.

Physicist Barbara Maher of Lancaster University in the United Kingdom, who led the research team studying industrial magnetite levels in the brain, believes it to be a “plausible risk factor” worthy of meriting attention from both researchers and air emissions policymakers.