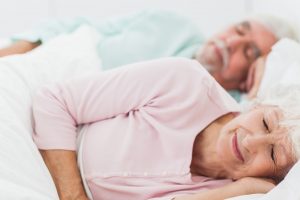 Everyone enjoys waking up refreshed after a good night’s sleep. Although it seems your brain and body have shut down during this period, your brain is quite actively performing many critical functions during sleep. This is why it is so important to get regular uninterrupted quality sleep so that your brain has a chance to perform essential tasks during the night.

Trash Removal. When you are asleep, some parts of your brain become much more active than during the day. One part is responsible for clearing out toxins in the brain. This waste removal system, called the glymphatic system, has been shown to support reduced formation of amyloid plaques, which are associated with Alzheimer’s. While there is no direct evidence that inadequate sleep can cause Alzheimer’s, it may be a contributing factor.

Finding Order in Disorder. We are bombarded every day by much more stimulation than we can possibly process all at once: sights, sounds, thoughts, emotions, etc. During sleep, we have the opportunity to register and categorize all the various stimuli we experience during the day. Memories are formed and collected during this process. Studies have shown that people who believe they can function optimally on only four or five hours of sleep, in fact perform poorly on memory tests.

Perchance to Dream. Sleep and dreaming are closely involved in creating memories. One of the chemicals found to be associated with memory creation – acetylcholine – is also connected to sleep and dreaming. People with Alzheimer’s have less and less acetylcholine as the brain cells that produce this chemical begin to deteriorate and, as a result, have fewer dreams and impaired memory creation.

Rest and Repair. A recent study on animals at the University of Pennsylvania has shown that extended sleep deprivation can damage brain cells responsible for cognition and alertness and that these injuries may be irreversible. Chronic wakefulness may also lead to a shrinkage in brain volume. Other studies have shown that chemicals produced by our bodies during deep sleep help repair cells in our bodies. This may also be happening in our brains during deep sleep.

Improving Your Day. Recent research affirms what we already know from personal experience: a lack of sleep can make it harder to focus and even to regulate our own emotions. When overtired, we might overreact to stress or emotional triggers. We might also be more susceptible to feeling anxiety or worry. All this can contribute to an increased risk of depression or other serious mental health problems.

So go ahead and allow yourself restful and relaxing sleep every night. The National Sleep Foundation recommends 7 to 9 hours per day for adults. Quality, deeply restful sleep every night is essential for optimal body and brain health, and creating and storing memories. It improves your ability to focus during the day and can elevate your mood and feeling of well-being. And who doesn’t love that feeling of waking up refreshed and revitalized after a night of deeply restorative sleep?