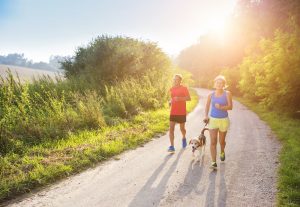 It is no secret that exercise has many benefits for both physical and mental well-being, and doctors have long been touting the value of aerobic exercise for both cardiovascular and brain health. Aerobic exercise has been shown to keep cognitive abilities from declining and reducing the risk for Alzheimer’s disease.

Regular exercise is often credited with relieving stress, reducing risk of stroke, lowering blood sugar and improving balance and coordination. Scientists have also suggested that the increased blood flow to parts of the brain resulting from vigorous exercise may stimulate the growth of neurons involved with memory and learning. While there is a clear consensus that exercise can help improve brain and memory function, there has been uncertainty about the exact reason for this.

Now a new study by the National Institute on Aging is helping to shed light on exactly how exercise helps boost memory functioning. The study, recently published in the journal Cell Metabolism, shows that running induces an increase of a certain protein, cathepsin-B, that promotes production of new brain cells. Animal studies demonstrated both an increase in new brain cells and improved memory function as a result of running. The connection between exercise and memory function was observed in humans as well.

This exciting new discovery of the role of cathepsin-B in brain cell production helps provide a fuller understanding of the link between exercise and brain health and provides yet another reason to encourage regular exercise to enhance both physical and mental fitness.

Running and exercise in general are certainly beneficial to improving brain functioning and overall health, but not everyone has the ability to maintain a regular running schedule in order to realize the benefits. It is hoped that as a result of this study, the identification of the protein responsible for the improved cognition may lead to new therapies and treatments for Alzheimer’s disease and other forms of dementia.