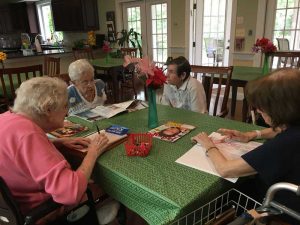 According to new research from the Johns Hopkins Bloomberg School of Public Health, public engagement and civic activity helps the memory center in aging brains maintain its size and in some cases even grow larger.

This new research recently appeared in Alzheimer’s & Dementia: The Journal of the Alzheimer’s Association and was drawn from a study of a Baltimore based program that matches retirees with young people in public schools to act as reading mentors.

At two years in length, this study was longer than many, providing enough time to see actual changes in cognitive ability. In typical adults over the age of 65, the memory center of the brain may atrophy at a rate of between .8 % and 2%. But the subjects in this study showed significantly different results. In fact, the men, who had somewhat better results than the women, showed an increase in brain volume of between .7% and 1.6% over the two year course of the study.

It is no secret that engagement, social activity, reading, problem solving and creativity in general can, at the very least, improve the life conditions of Alzheimer’s and dementia patients. And now with studies like this, it looks like there may even be a possibility of improvement. What is needed is more extensive and readily available programs for seniors of all socio-economic backgrounds and life circumstances. Consistency over time is critical, and while the nature of the programs need not be excessively structured, there must be emphasis on cognitive abilities that involve some measure of recall and memory.